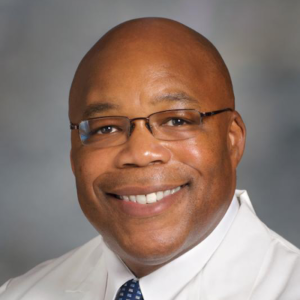 Dr. Pettaway is a Professor of Urology at The University of Texas MD Anderson Cancer Center in Houston, Texas. His clinical practice is based on treating patients with genitourinary malignancies, including penile, urethral, and prostate malignancies. The goal of his prostate-related studies is 1) to further define host and molecular markers of cancer progression, and 2) to reduce disparities in prostate cancer outcomes among African Americans and the underserved by studying both clinical and biologic correlates of aggressive disease. He has served as the Medical Director of the Prostate Outreach Project (POP), an initiative which has educated and screened over 5,000 men. Dr. Pettaway has also served as the Co-Director of a National Cancer Institute-funded study evaluating the influence of West African ancestry on the incidence and aggressiveness of prostate cancer among African American and Puerto Rican populations.

Articles by Curtis A. Pettaway, MD

Germline Predisposition for Prostate Cancer Among African Americans and Other Minorities: What Do We Know?

Curtis A. Pettaway, MD, Professor of Urology at the University of Texas, discusses how germline DNA mutations like BRCA1 & 2 can predispose men to aggressive prostate cancer as well as influence how men respond to different kinds of therapies. He notes the increased frequency of certain mutations in particular ethnic groups, but emphasizes that while testing for these important alterations is becoming common and guideline-based it is less commonly performed among African Americans and other minorities. Given the higher incidence and mortality of prostate cancer among African Americans, he notes the need for including these patients in research (including genetic sequencing, and collecting data on clinical and family history) that will define both the significance and types of genetic alterations that are important for patient care and family counseling.
This educational activity is based on a series of lectures on genetic testing for prostate cancer from the 2019 Philadelphia Prostate Cancer Consensus Conference. Further activities from this conference include: