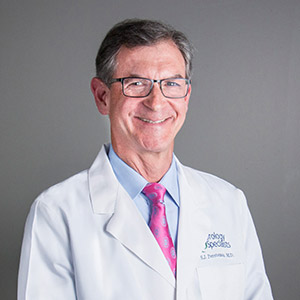 Urology Specialists of the Carolinas

Dr. Peretsman is a urological oncologist with Urology Specialists of the Carolinas in Charlotte, North Carolina. His practice is focused mostly on robotic renal and prostate cancer surgery, prostate HIFU, prostate cryoablation and brachytherapy, and the ancillary procedures associated with prostate cancer care.

He is in his 16th year providing care with the Sonoblate 500 HIFU device and has served as site medical director both offshore and domestic. He has published HIFU work in the Journal of Urology and Journal of Robotic Surgery. Dr. Peretsman does international training and in 2020 remotely assisted the first Sonoblate cases performed in China.

Samuel J. Peretsman, MD, a urological oncologist with Urology Specialists of the Carolinas in Charlotte, North Carolina, discusses the results and the implications of two recent American studies of high-intensity focused ultrasound (HIFU) for treating prostate cancer. In the first part of the presentation, Dr. Peretsman reviews the initial outcomes of a study on HIFU of hemigland ablation for prostate cancer. He explains that reports of focal HIFU performed in the United States have been lacking, and therefore this study aimed to report the initial and largest American series of HIFU prostate gland ablation as a primary treatment for prostate cancer. Dr. Peretsman discusses the methodology, limitations, and results of the study, concluding that short-term results of focal HIFU indicate safety, excellent potency and continence preservation, and adequate short-term prostate cancer control. In the second part of the presentation, Dr. Peretsman outlines the lessons learned from a study of salvage robotic prostatectomy following whole-gland HIFU. Based on the data on patients with HIFU-persistent disease, Dr. Peretsman argues that there is room for improvement in HIFU treatment follow-up in order to optimize the results of salvage therapies. He also concludes that more assurance of successful salvage therapy may boost patient confidence in HIFU as a primary therapy choice.