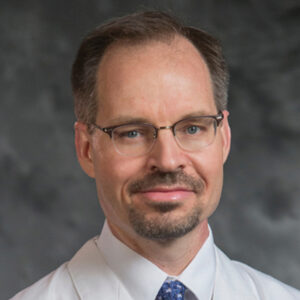 Thomas J. Polascik, MD, FACS, is Professor of Surgery at Duke University Medical Center and the Director of Surgical Technology at the Duke Prostate and Urological Cancer Center. He is the Founder and Co-Director of the International Symposium on Focal Therapy and Imaging of Prostate and Kidney Cancer, which began at Duke in 2008. Dr. Polascik is the Editor of Imaging and Focal Therapy of Early Prostate Cancer. He is Founder and President of the Focal Therapy Society, as well as Director of Duke’s Society of Urologic Oncology Fellowship Training Program and the Genitourinary Program on Focal Therapy at the Duke Cancer Institute. He is the Medical Director of Duke’s Men’s Health Initiative Screening Event and is a governing member of several medical boards and societies. His clinical and research interests focus on prostate and kidney cancer. He has authored over 350 peer-reviewed manuscripts and book chapters.

Thomas J. Polascik, MD, FACS, Professor of Surgery at Duke University and Director of Surgical Technology at the Duke Prostate and Urological Cancer Center, discusses the process of active surveillance and retreatment after image-targeted focal therapy (FT). He begins by describing cancer control and how it may fail. Dr. Polascik then defines intermediate to long-term treatment success as eradication of all aggressive or clinically significant disease in the treated zone, and treatment failure as a significant volume of .2 cc or greater of GS 3+4 in the treated zone and development of any foci of clinically significant cancer requiring further therapy. He cites several studies as contributing to the conclusion that PSA alone is insufficient in defining oncological success, and that a targeted and systematic biopsy should be done 6 to 12 months post-treatment based on rising PSA or suspicious mpMRI lesions. Dr. Polascik then reviews a study outlining guidelines for post-treatment FT for localized prostate cancer in clinical practice. He outlines FT failure through the categories of ablation, targeting, and selection failure, which respectively consist of leaving a tumor in the ablation area, energy not being correctly applied to the tumor, and a patient being inappropriately selected for FT. Dr. Polascik then discusses repeat FT, stating that it is recommended when the reasons for the initial failure can be identified and corrected. He cites Donaldson et al. as showing that FT retreatment rates below 20% are clinically acceptable, any subsequent whole gland therapy reflects a failure of focal therapy, and that a retreatment rate of below 10% with whole gland therapy is clinically acceptable. He concludes by stating that functional outcomes will be clear at between 12 and 18 months post-treatment and by recommending that a post-ablation targeted biopsy of the ablation zone and any new lesions be done between 6 and 12 months post-treatment and possibly 5 years post-treatment, and that PSA density be used for surveillance.

Thomas J. Polascik, MD, FACS, Professor of Urology at Duke University Medical Center, discusses the effectiveness of focal therapy for prostate cancer as an alternative to radical therapy. He presents a trial that tested vascular-targeted photodynamic therapy (VTP), which resulted in a higher chance for negative biopsy and lower risk of progression at 24 months when compared with active surveillance. Patients who underwent VTP were also less likely to later require radical treatment. Dr. Polascik then highlights another promising form of localized therapy, gold nanoshell-localized photothermal ablation, in which the tumor site is infused with gold nanoshell localized particles that are then activated by a laser. Lastly, he describes the Focal Therapy Society, an international group whose mission is to advance minimally invasive treatments and image-targeted cancer treatments. In addition to promoting focal therapy, the Society creates training and education opportunities, advocates for changes to clinical guidelines, and authors white papers.

Thomas J. Polascik, MD, FACS, a professor of urology at the Duke Cancer Institute, gives an overview of tips and tricks for successful cryoablation of the prostate while avoiding preventable complications from the procedure. He discusses common areas of complication and injury during cryoablation, including sphincteric incontinence, rectal fistula, and urethral slough, as well as the possibility of incomplete ablation resulting in PSA recurrence. Dr. Polascik then outlines common reasons for injury or incomplete cover to the prostate, urethra, rectum, and sphincter, as well as techniques to ensure a successful cryoablation surgery.

Ask the Expert: What Are the Barriers to Focal Therapy Becoming More Widely Accepted?