One of the major treatments for prostate cancer is androgen-deprivation therapy (ADT), and about 50% of prostate cancer patients are treated with ADT at some point in their disease. ADT is used most frequently for patients with local but advanced prostate cancer or metastatic prostate cancer. The rate of ADT use in the USA increased in the 1990s and continues to be high today. ADT treatments work to decrease the amount of androgens in the prostate microenvironment to prevent this tumor progression from initiating via testosterone. This can be done with medical or surgical castration (orchiectomy). Many different types of drugs are available and approved for use as ADT for prostate cancer patients, but use different mechanisms of action (eg, LHRH agonists, LHRH antagonists, CYP17 inhibitors, and older and newer anti-androgens). There are many issues around hormone therapy that not all doctors agree on, such as the best time to start and stop it and the best way to give it. Studies are now looking at these issues, and we hope that this Next Generation Learning Center will provide additional information for the practicing physician. 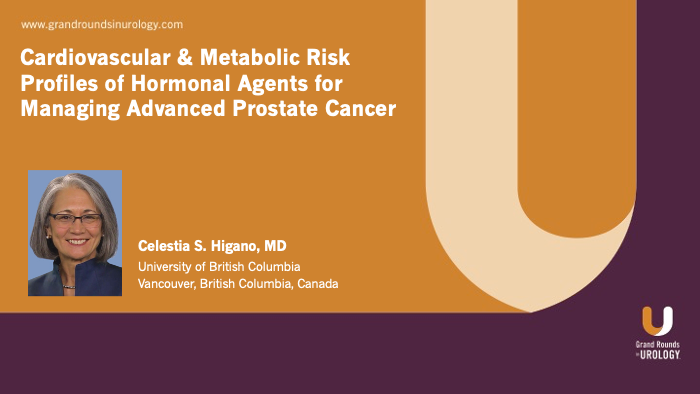 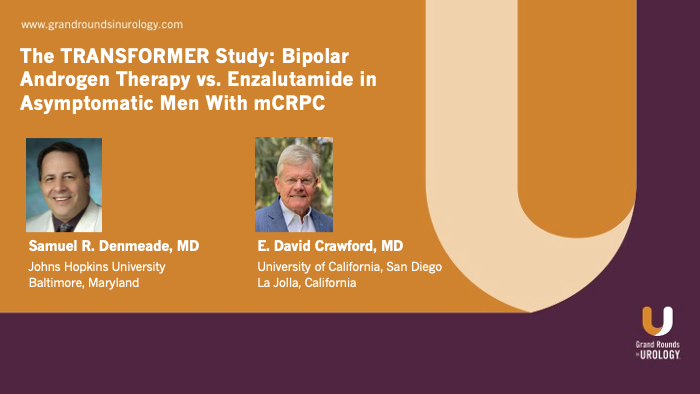 The TRANSFORMER Study: Bipolar Androgen Therapy vs. Enzalutamide in Asymptomatic Men With mCRPC 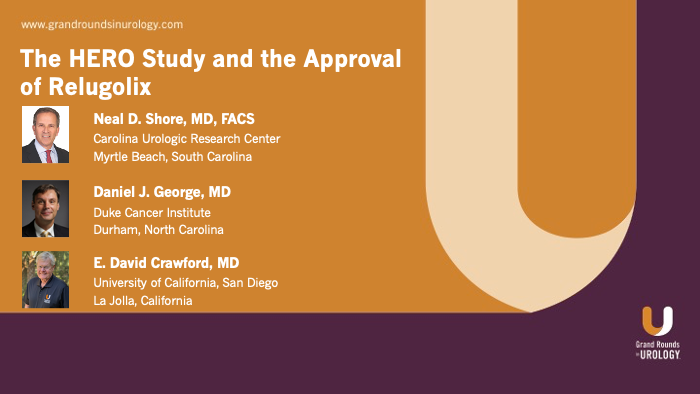 The HERO Study and the Approval of Relugolix 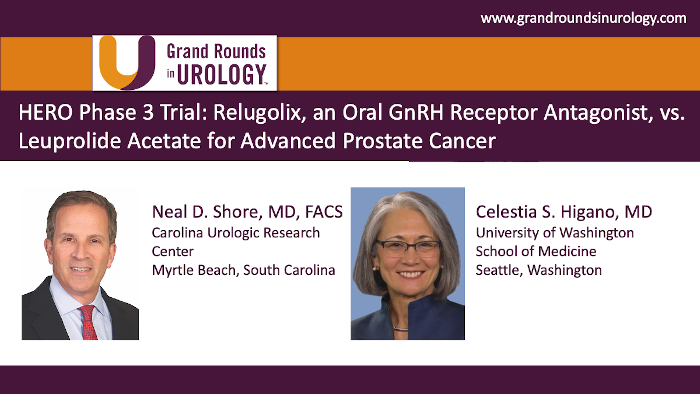 Neal D. Shore, MD, FACS, Medical Director for the Carolina Urologic Research Center, presents the key aspects of the HERO phase 3 trial. The Hero trial looked at Relugolix, an oral GnRH receptor antagonist, versus Leuprolide Acetate for the treatment of advanced prostate cancer. Following this in an interview with Celestia S. Higano, MD, section editor of the ADT Next Generation Learning Center on Grand Rounds in Urology, about the study’s findings, and the implications that this exciting new development in prostate cancer treatment could have in the field of urology. 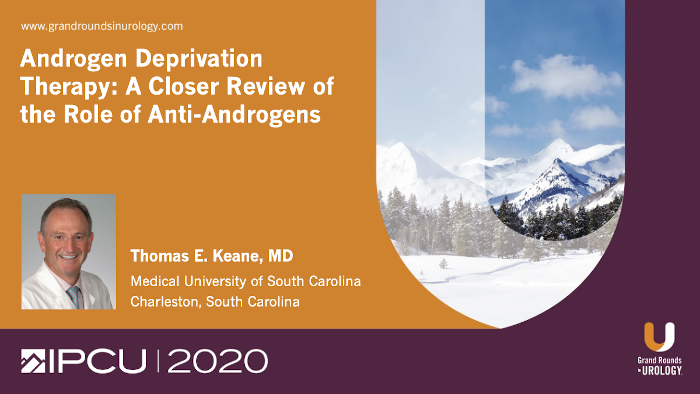 Androgen Deprivation Therapy: A Closer Review of the Role of Anti-Androgens

Thomas E. Keane, MD, Professor and Chairman of the Department of Urology at the Medical University of South Carolina in Charleston, discusses the role of anti-androgens in androgen deprivation therapy (ADT). Dr. Keane looks at some studies out of Canada showing the ideal T levels during ADT, but goes on to point out that both the FDA and EU regulatory authorities do not follow these guidelines. 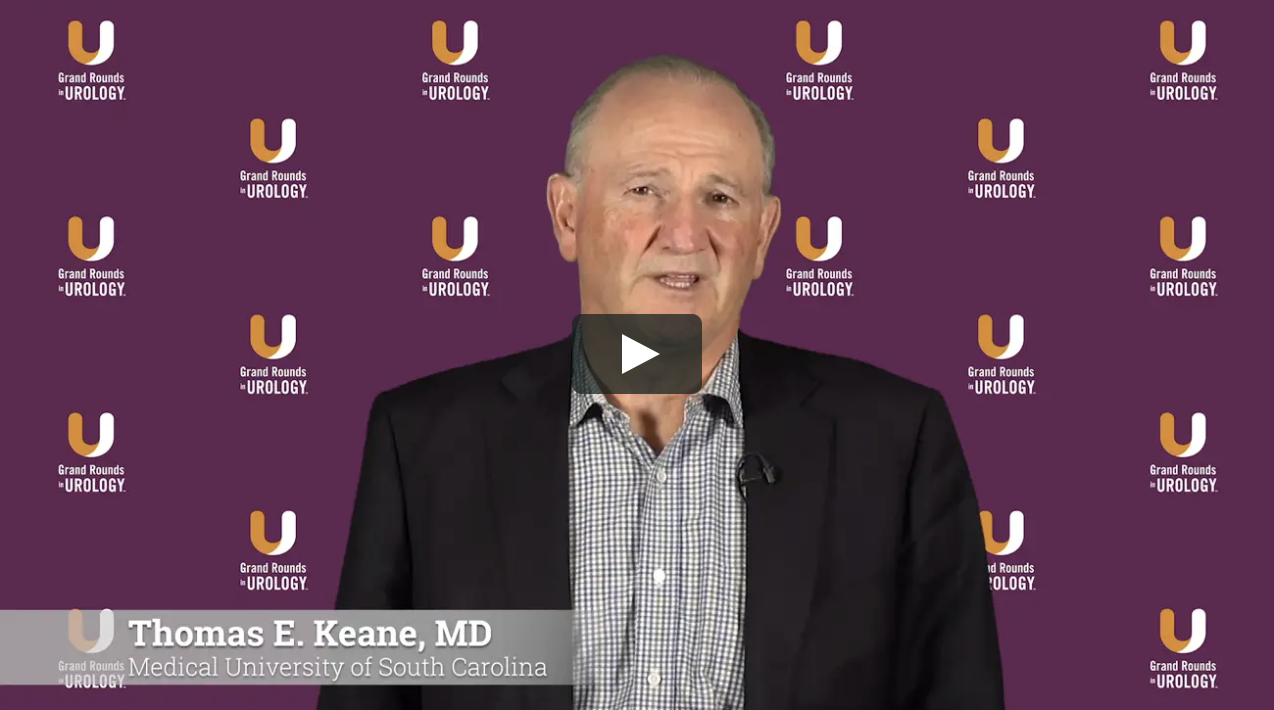 Agonists vs. Antagonists for the Treatment of Advanced Prostate Cancer

Thomas Keane, MD, Chair of Urology at the Medical University of South Carolina, discusses the choice between agonists and antagonists when making treatment decisions on the use of androgen deprivation therapy (ADT) for advanced prostate cancer. Additionally, he addresses concerns over the 28-day formulation of antagonists. 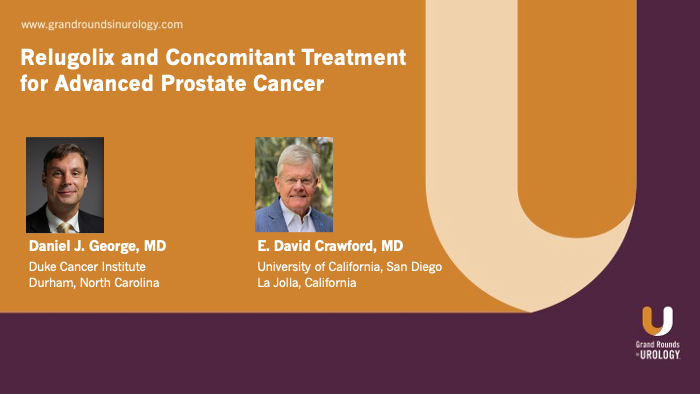 Daniel J. George, MD, comments on research presented at the 2021 GU ASCO conference about the recent approval of Relugolix and concomitant therapies for advanced prostate cancer. 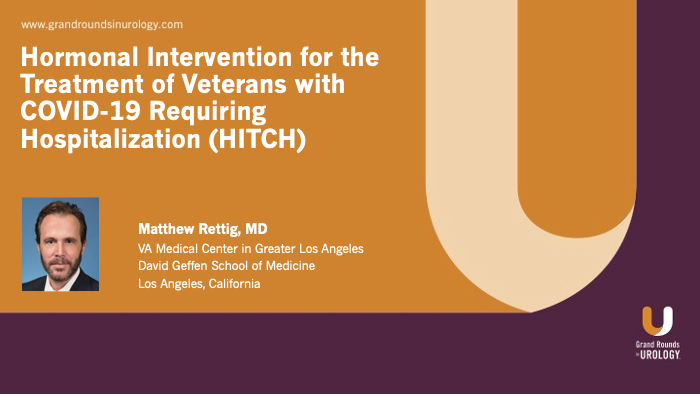 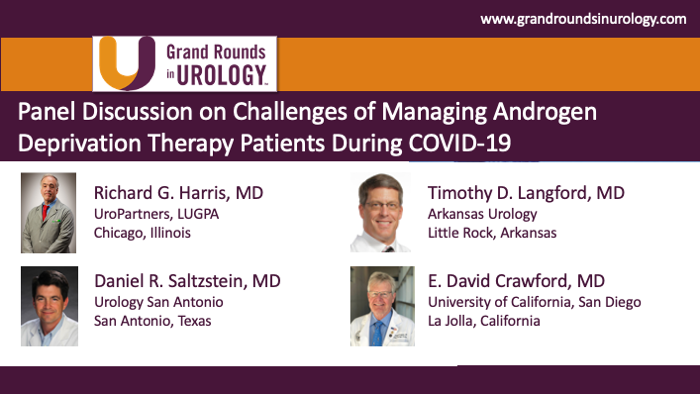 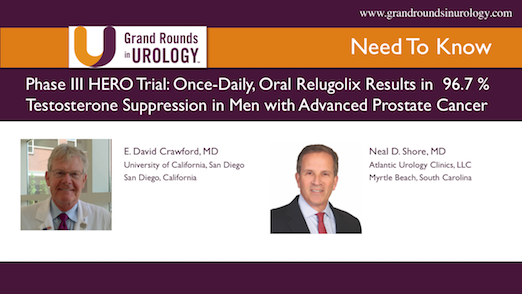 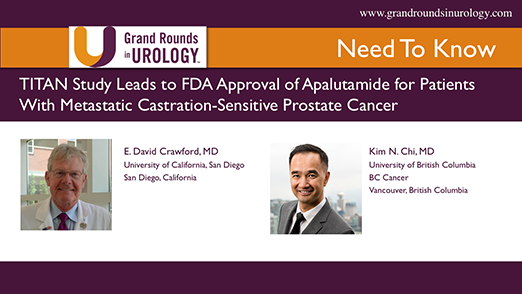 Kim N. Chi, MD, and E. David Crawford, MD, discuss the findings of the TITAN study regarding the use of apalutamide in patients with castration-sensitive prostate cancer (mCSPC) who are also undergoing androgen deprivation therapy (ADT). These findings led to the FDA approval of apalutamide for these patients. The results showed a significant reduction in radiographic progression or death and a reduction in overall risk of death, and therefore support the addition of apalutamide to ADT for a broad range of patients with mCSPC. Apalutamide was initially approved in 2018 for patients with non-metastatic castration-resistant prostate cancer. 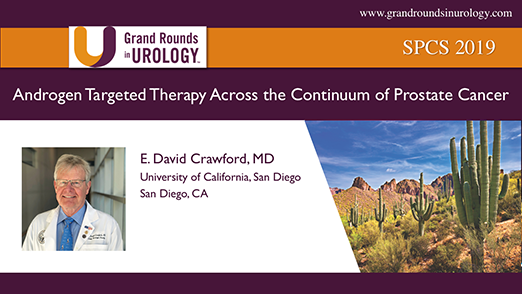 Androgen Targeted Therapy Across the Continuum of Prostate Cancer 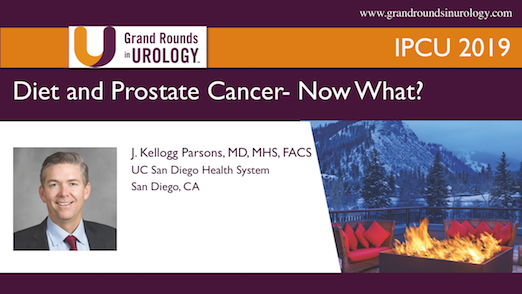 Diet and Prostate Cancer- Now What?

Abraham Morgentaler, MD, FACS, reviews lectures from the first day of the 3rd annual meeting of the Androgen Society.

Recognizing and Managing the Side Effects of Androgen Deprivation Therapy

Alicia K. Morgans, MD, MPH, Associate Professor of Medicine in Hematology and Oncology at the Robert H. Lurie Comprehensive Cancer Center of Northwestern University, discusses the side effects of androgen deprivation therapy (ADT) and how urologists can mitigate them. She observes that up to 40% of non-metastatic prostate cancer patients are treated with ADT, and those patients tend to be older and have more comorbidities.

Disease Flare with LHRH Agonists is a Myth

John W. Davis, MD, debates the pros of using <20mg/mL as a threshold for the optimal nadir level of serum testosterone in prostate cancer patients treated with ADT.

R. Jonathan Henderson, MD, argues that the goal of ADT should be to achieve and maintain the lowest levels of T possible in prostate cancer patients. The FDA-recommended target low of 50 ng/dL originates from constraints of outdated technology, and multiple studies indicate that there is a benefit to patients when T-levels fall below 20 ng/dL.

Point Counterpoint in ADT—Agonists versus Antagonists

Lawrence Karsh, MD, FACS, argues that agonists are effective, sustainable androgen deprivation therapy (ADT) options, and the belief that agonists present a high cardiovascular (CV) risk could be due to selection bias in trials. Conversely, Thomas Keane, MD, argues that patients treated with antagonists have lower CV risk and are more responsive to ADT than those treated with agonists.

The Role of FSH in Prostate Cancer

Marc B. Garnick, MD, discusses whether or not follicle stimulating hormone (FSH) affects prostate cancer progression and cause adverse effects when used in combination with androgen deprivation therapy (ADT). He presents evidence for both the pro and con sides of this argument.

Dr. Nicolas Mottet presented  “EAU Guidelines for Monitoring Prostate Cancer Patients Under Treatment” at the 6th Symposium on the Treatment of Prostate Cancer (STOP-6), which was held in Lisbon, Portugal between October 14th and 16th 2016. 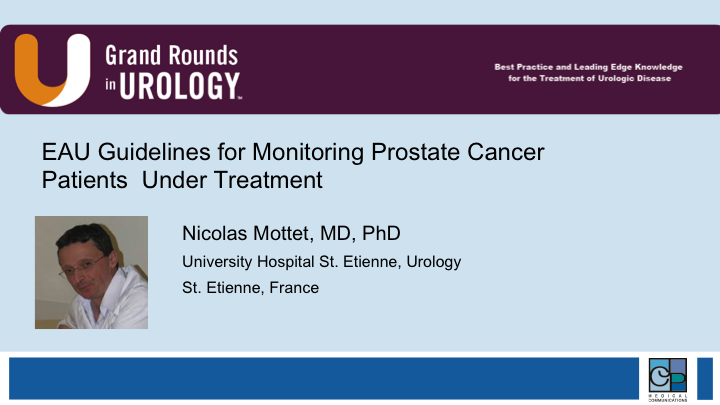 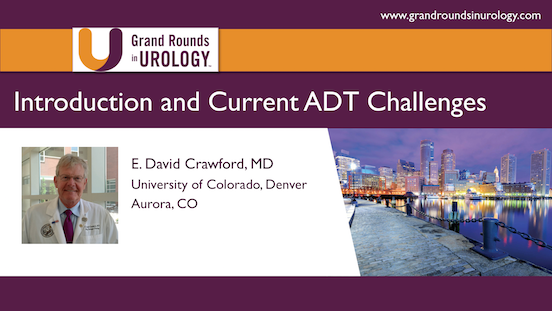 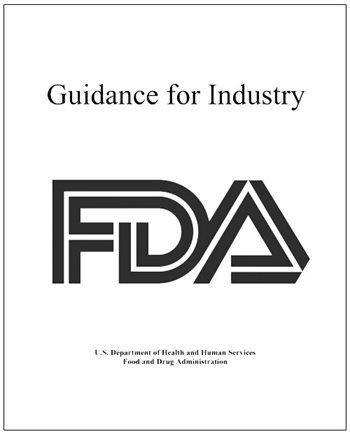 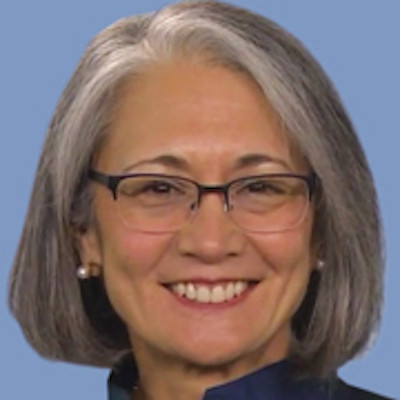