We heard a tremendous amount today and a lot of groundwork was laid on the role of prostate cancer screening. Here are my disclosures.

The most important things to always remind ourselves and others is that prostate cancer despite our aggressive screening and treatment remains the second leading cause of cancer related death. This is a very personal thing for us, because we’ve all known men that we’ve treated who have done well with their treatment who we’ve cured of their cancers, who needed to be cured of their cancers. Unfortunately, we also know men that have succumbed to the disease.

Just for our practicing urologists, have you noticed a decrease in referrals for elevated PSA? This is the first audience response question. Just to get an idea of where we’re at now. So 0%; 0-10%; 10-20%; greater than 20%.

Okay. Thirty-three percent of people have not noticed any change in the referral, and 67% of people are in the 10 to 20% range. I’m going to show you some data that really supports number 3.

Okay, so 70% of people from the get go think there will be some risk adapted screening as we move forward.

So we all know men that we’ve diagnosed too late, that we’ve lost. So this is a very personal issue for us, and we’re under attack to a certain extent.

There’s been some mistrust in the community about what our motivations are and have been and I think that we’ve been really victims of our own success.

So we’ve witnessed a tremendous stage and grade migration. Presenting PSAs have dropped well below that 10 ng/ml threshold. And we’re detecting disease so early that it’s difficult to distinguish indolent from aggressive disease. And that’s why we have all of these new biomarkers that are emerging.

We know that screening is an invasive anxiety provoking event. Family doctors as well as men at risk for prostate cancer are more than willing to forego the digital rectal examination, and the blood test which they don’t completely understand.

In the past, everyone was screened. Starting at age 50 there was this concept of risk adapted screening that was introduced by the AUA, but we’ve seen the excellent talks by Dr. Andriole that broad-based prostate cancer screening may not realizing the benefits that we were hoping for.

Why is that? Well, PSA and digital rectal examination are relatively poor markers in early stage patients who are not at high risk. PSA based prostate cancer screening is costly. It’s associated with morbidity, and has hadn’t the huge life saving benefit that we had hoped for.

These are the things that the USPSTF pointed to when they give prostate cancer screening with PSA and DRE, a grade D recommendation. I’m not going to belabor the point but this 5 ng.ml threshold that was established in the early 90s was reflective of a different disease than what we’re seeing today. We know that there are problems with specificities as Lisa pointed out. We know that there’s problems with sensitivity with 12.5% of men with intermediate and high risk disease, identified during the not for cause biopsy placebo arm of the prostate cancer prevention trial having PSAs less than 0.5 ng/ml.

Digital rectal examination, well, Dr. Crawford alluded to the length of his finger. I think all of us suffer from problems with sensitivity with our fingers, and we’ve known since the 50s that DRE is a poor marker for prostate cancer especially in low stage patients.

Dr. Crawford has also done a whole bunch of work in cost of PSA based screening and cancer care. $3.5 billion are going to be spent this year alone screening, diagnosing, and staging prostate cancer. And this value based medicine era that we’re embarking on is going to have a real impact on how we screen and detect men for prostate cancer. $10 billion to treat men, %9 billion for the treatment of advance prostate cancer with new pharmaceuticals which I’m sure is soon to balloon as we see, enter in this era of men presenting with more significant, more advanced disease.

Dr. Andriole went into this a fair bit. These two studies were biased to the null [phonetic], the PLCO and the ERSPC. But it’s apparent that as we follow these studies out longer, they may in fact be a survival benefit but it’s not huge.

The USPSTF gave it a grade D recommendation. Many primary care doctors have adopted this as we heard earlier, and there’s talk even of financially penalizing doctors who are ordering PSAs.

What about the change in the face of prostate cancer that we’ve seen since USPSTF recommendations? We wrote a letter to the editor of New England Journal which is going to be published next week, looking at the change in prostate cancer presentation in San Diego County. We’ve seen here a 30% increase in the proportion of intermediate and high grade disease in San Diego in the three years following the USPSTF.

And addition, in keeping with that ARS question, we saw a 19% decrease in the number of men referred for elevated PSA. The median pre-biopsy PSA level has risen from 7.0 ng/ml to 8.0 ng/ml. The rise in the proportion of men having very high PSAs over 10 ng/ml has gone from 28 to 38% so an increase of 10%. And men diagnosed with Gleason 8 or above tumors rose from 21 to 30%, so we’re starting to see that C change already. We cannot afford to go back to that pre-PSA era.

The American Urologic Association, the American Cancer Society at least are giving men the opportunity to make that decision on their own, but lack guidance on how and who to screen exactly.

The only risk factors we have are age, family history and racial origin. And I would argue that the last two here are really surrogates for genetic predisposition of prostate cancer. Another potential risk factors in PSA early in life.

What is the impact of limiting screening to high risk groups? What if we did focus our efforts on men with family history, or let’s say a genetic pre-disposition? So in work that we presented at the AUA and published in Journal of Urology, you can see data here from the PLCO study where we looked at men without a family history. There was no survival benefit to PSA based screening in this cohort, so very much in keeping with the original result. But if we did focus our screening efforts on those men with a family history, you can see that these survival curves diverge, and there is a statistically significant survival benefit to screening men with a family history. Unfortunately, only 7% of men in this study would benefit because it’s only helpful in the positive result leaving 93% of men unsure of their risk stratification going into their prostate cancer risk years.

What are the potential role of genetic markers on prostate cancer screening, and really this risk adapted screening approach? Now genetic polymorphisms are natural genetic variations which distinguish you from you and me from me. The most common one is the single nucleotide polymorphism which is a base change and a specific nucleotide.

In 2007, thanks to some groundbreaking research, the Genome-Wide Association Study was ushered in, and we were able to make associations of these single nucleotide polymorphisms with a complex disease risk.

Initially, in 2008 five of these SNPs were identified with prostate cancer risk, but all had a relatively smaller load contribution to prostate cancer. By packaging these five SNPs together, we were able to identify a group of men who had extremely a 10-fold higher risk for prostate cancer and this garnered a lot of attention. Proof of principle but they were relatively few men in this high risk category.

Fast forward to 2009, 33 single nucleotide polymorphisms had been identified, and now there are an increasing number of SNPs being identified. But we found that test performance doesn’t really increase beyond 33 SNPs. We’ve tested this test, this SNP-based assay in several randomized control not for cause biopsy trials including the REDUCE, PLCO, Prostate Cancer Prevention Trial, and in each of those studies there is this strong association with prostate cancer.

In terms of performance and comparison of other biomarkers you can see its performance here. With an AUC of 0.59 which compares very favorably to all of the other biomarkers. But really this is a biomarker that should be thought of very much as the 21st century family history. But much more powerful than family history. So you can see in these randomized trials that the genetic score outperforms dramatically family history in terms of its ability to predict for prostate cancer.

And like the pregnancy test, the family history is really a binary result. It’s a yes or no, plus or minus. The genetic score gives you like PSA, a risk stratification that’s bell-shaped, and we can identify men who are at extremely high risk for prostate cancer in whom it really behooves us to proceed with prostate cancer screening.

The baseline risk for the average American men at this time is 17% that showed a fall. In the REDUCE trial, the average risk was 23%.

So looking at the negative predictive value, in 100 men with metastatic prostate cancer, only four men or 4% tested negative for this. And we were able to pick up an additional 34% of men in whom their family history was unknown. So there is some significant opportunity here because this is baseline

This is a stable genetic marker available at birth. It compares favorably to PSA and again I just want to reiterate it should be thought of as a better more informative family history. And it can be used to risk stratify men early in life to further tailor their PSA based or new biomarker based screening.

So in the future, we’ll likely be limiting prostate cancer screening to high risk groups. Those with positive family history, African-American race, high genetic score, or maybe even an early PSA. That’s improving PSA efficiency. Newer tests will likely be coupled to PSA prior to biopsy as Stacy alluded to. And prostate biopsy tissue will be evaluated with new biomarkers for indolent versus aggressive disease. 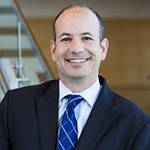 A. Karim Kader, MD, PhD, is a board-certified urologist who specializes in screening, detecting, treating and preventing prostate cancer. As a Professor in the Department of Urology and Director of Urologic Oncology at the University of California, San Diego, Dr. Kader instructs medical students, residents and fellows at UC San Diego School of Medicine. His current research interests include genetic markers to assess risk and predict outcomes in urologic cancer. In addition, he examines the impact of augmented reality and enhanced imaging techniques for education and improved surgical outcomes. Dr. Kader completed a Fellowship in Urologic Oncology at the University of Texas MD Anderson Cancer Center in Houston and a Residency in Urology at the University of Toronto in Ontario, Canada. He earned his medical degree and doctoral degree from the University of British Columbia in Vancouver, British Columbia. Dr. Kader is nationally recognized for his expertise in performing robot-assisted radical cystectomy and urinary diversion for patients with bladder cancer. He holds several patents for genetic discoveries focused on the early detection and prevention of prostate cancer in addition to device patents for prostate cancer treatment. He is the principal investigator in numerous clinical research projects and has published extensively. 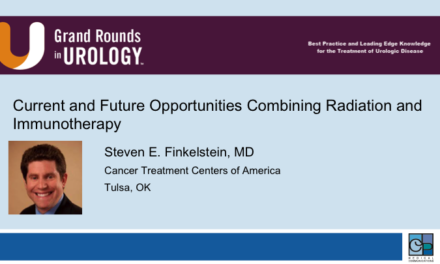 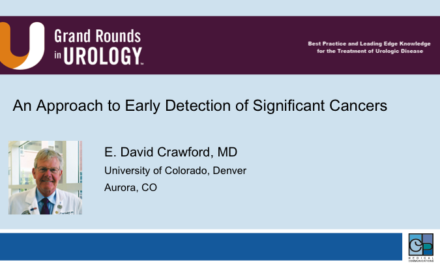 An Approach to Early Detection of Significant Cancers 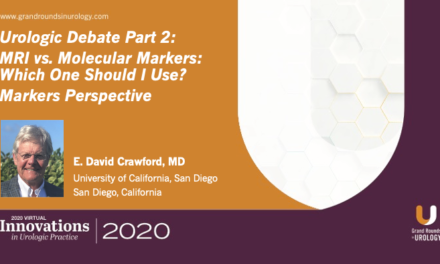 Urologic Debate Part 2: MRI vs. Molecular Markers: Which One Should I Use? Markers Perspective 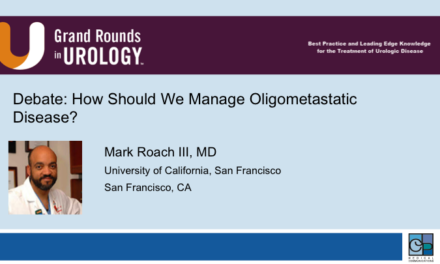 Debate: How Should We Manage Oligometastatic Disease?