Hormonal therapy in prostate cancer, a historical review from Europe. Well, Europe is that country that you all know. It’s something like 600, 700 million people. It’s not a small country, now it’s not the biggest of the continents, but prostate cancer is like in all Western countries, quite prevalent over there. It’s the most common cause of cancer in Europe. It’s slow growing and the primary goals of cancer.

Data when you translate it in Europe, we have 2.6 million new cases of cancer in Europe of which 11% are prostate cancer. That’s the whole of Europe. But when you go to a country like Sweden, where there is a very long life expectancy, and the low mortality of other comorbidities, heart disease or smoking, you see that prostate cancer is the most common malignancy in men, and it accounts for nearly 30% of cancer that’s in men so it’s becoming more and more prevalent.

What is the goal of hormonal therapy?

Everybody thinks that Huggins was the man who developed the concept of hormonal treatment in prostate cancer, but this is a slide that I got from Usch Studer. It’s a slide in German and it’s on a French speaking urologist, working in Switzerland in Montreux. When you see the dates somewhere around this, it’s 1940. You remember Huggins is in 1941. He published more than a thousand cases in which he analyzed the beneficial effects of hormonal therapy in prostate cancer but also in BPH.

Indeed it was not a scientific study like Huggins did, but at least it was a clinically relevant study way before Huggins published his first four patients on alkaline phosphatase. It was a clinical study. By the way, many, many publications appeared before 1940 on the role of castration, on orchiectomy in prostate diseases. In hormone, the goal of hormones is essential, but what is the most efficient therapy? What are the side effects which are more and more becoming more and more important since hormones will be given longer and longer because of better survival in metastatic disease? How long will it work and when will the patient recur? And after hormonal therapy, do we have a second-line hormonal therapy? This slide is still important for some patients, although we now have many other forms of therapy.

And then how should we give the hormones? Orchiectomy, which is over of course in most countries, analogues, antagonists, combination, immediate, deferred, neoadjuvant, adjuvant, intermittent or maybe either curative intention.

Well, let’s see what the European experience is. You see here the name of the EORTC GU-Group. You probably don’t exactly know what it is but it’s a European organization for research and treatment of cancer, GU group, and this was unfortunately no longer a very, very active group for 40 years, well, almost 40 years. It stopped working two years ago.

They did a lot of trials in all forms of urological malignancies, and as you can see, they did 29 trials, prospective, mostly randomized phase 2 and phase 3 trials in prostate cancer. I’m going to go with you to a couple of the achievements of those trials which are important.

Here are the first trials. You have to remember in Europe, everybody is competing with each other. So in 1975, I still remember that, there were three EORTC GU groups, an Italian, a French, and a British. In 1976, Pavone-Macaluso and Schmidt were able to bring the groups together. The first trials they did were in prostate cancer using cyproterone acetate, medroxyprogesterone acetate and of course the standard therapy in those days. They were using 1 mg because Dave Bayer just published his data on high dose of DES and cardiovascular mortality. This is in patients with metastatic and locally advanced prostate cancer, these would be impossible now, but they grouped all advanced diseases together.

And what was the outcome? Well, MPA, medroxyprogesterone, a non-steroidal antiandrogen was inferior to CPA and DES. There was no… can you imagine that they did the trial with oral Estracyt which is very toxic? They did but they discovered that DES which was less toxic at least hematologically that DES was comparable with Estracyt but there were much more cardiovascular complications even with 1 mg of DES. Unfortunately, the combined androgenic deprivation and the LHRH analogs came along.

You all think that Professor Crawford was the first to do that, but by far he wasn’t. Combined androgen deprivation was again explored in 1980, long before LHRH agonist was available. In a study that the EORTC combining orchiectomy so castration, orchiectomy with a non-steroidal antiandrogen and DES. This was the first ever trial of combined androgen deprivation versus simple castration. Then of course you had the trial from de Voogt because buserelin, they had a trial with Zoladex from Louis Denis, and down the comparison whether flutamide is better, nonsteroidal antiandrogen is better than the steroidal antiandrogen.

Well, let’s look quickly at the results. Short-term CPA in the trial with orchiectomy could prevent flare. That was clear, and that was something which was in many other trials confirmed. When you compare orchiectomy and orchiectomy with CPA, a non-steroidal antiandrogen and DES, there was no advantage. Orchiectomy and buserelin, that was daily injections in those days, and CPA, no difference. But the study was in report. However when you look at the first yearly combined androgen deprivation with a nonsteroidal antiandrogen, the Louis Denis trial, there was initially not, but after a long term evaluation there was superiority of continuous combined androgen deprivation over short term androgen, nonsteroidal antiandrogen use.

The question was, is flutamide therefore superior to CPA. It was suggested by a metanalysis that there was a study, Fritz Schroder, the big man of the screening trial in Europe. Fritz Schroder did a trial in 1989 and did not find any difference between flutamide and CPA in a head to head comparison.

In the combined androgen deprivation trial, there was a larger benefit and better prognosis, factors by patients, but the effect was only discovered… could only be seen after 1.5 years. The other trial using buserelin and short term CPA, this trial did not show any significance in favor of the combination but the trial was most likely on the – – is the trial.

Here is the comparison of cyproterone acetate as compared to flutamide applied in a head-to-head and there was no difference in progression-free survival, overall survival, and also no difference in sexual side effects which was in those days very, very surprising because they have much more progesterogenic effect and ersogenic effect from cyproterone acetate as compared to flutamide. But I think it’s also a question of analysis. So in the trials of the EORTC, CPA is comparable to a nonsteroidal antiandrogen.

When we go further to metastatic disease, this is how trials can be analyzed. You remember this is the Louis Denis trial. Louis Denis, well known to many of you I guess, or should be known. He’s now retired but still very active. He did the first trial combining a nonsteroidal antiandrogen with Zoladex versus Zoladex alone–orchiectomy alone. The first analysis after 1.5 years which was a premature analysis, it did not show any difference. But when they did analysis, another analysis, when they did the analysis after 7.5 years, they found a difference in favor of the long term combination. Then you remember it was also discovered certainly in good risk patients in the SWOG trials, and then you remember the debates, whether combined androgen deprivation should be given for a long time or just antiandrogens with LHRH analogs to prevent the flare.

Today, we know that this is a metanalysis which have been published in Caledon and also from other publications we know, that the long time here is no difference between short-term and long-term combination therapy with respect to combined androgenic deprivation.

Usch Studer, who is also now just retired from University of Berne, was a guy who was from the very beginning of the EORTC exploring the deferred treatment. And he first explored it in lymph node, non-symptomatic patients, short-term treatment versus the deferred treatment. Now that was the first attempt to do that in ’84 and there was no difference but the next one in ’89 was the Usch Studer, 985 patients. You can see that the EORTC was capable to attract a lot of patients. And he did not find any… he didn’t find difference in favor of early treatment in lymph nodes, asymptomatic metastatic disease, and he was the first.

You published on that my friend, but he was the first to indicate that the prognosis of this category of patients was largely dependent on PSA doubling time. This was a publication already many, many years ago and we all know that it is very important as a prognostic factor.

Then the combination, a couple of slides on the combination with radiotherapy. Positive margins after radical prostatectomy. Local radiotherapy is beneficial and leads to longer survival. The Gadiasure Oncology group together with the EORTC did combinations with low external beam radiation therapy, a long-term and short-term hormonal treatment as been discussed yesterday. And of course there was an advantage for long-term combination.

And then of course the BOLLA studies which were duplicated also in the United States indicated that long term hormonal treatment is beneficial when you have a locally advanced disease without metastases that qualifies for hormonal treatment and radiotherapy as you can see here, 36 versus 6 months in favor of the 36 months.

So my conclusion Mr. Chairman is hormonal treatment is still the standard for the medical management of advanced metastatic prostate cancer, in Europe this certainly is. But new hormonal and non-hormonal therapies are emerging and will complete the future therapeutic armamentarium and we all know the new trials that are going on both in Europe and EORTC. 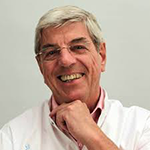 Dr. Debruyne was Professor and Chairman of the Department of Urology at the Radboud University Medical Center in Nijmegen, Gelderland, The Netherlands, from 1981-2006. He received his medical degree in 1967 from the University of Louvain in Belgium and completed residencies in surgery and urology at St John’s Hospital in Bruges, Belgium. He finished his urologic training at the University Medical Center in Nijmegen, The Netherlands, and did several clinical fellowships in Germany, the United Kingdom, and Austria. In 1977, he defended his PhD thesis at the Radboud University Medical School in Nijmegen, The Netherlands. Professor Debruyne was a member of the board of the Dutch Urological Association, Chairman of the European Organization for Research and Treatment of Cancer Genito-Urinary (EORTC GU) Group, Chairman of the European Society of Urological Research (ESUR) and Vice President of the Société Internationale d'Urologie (SIU). He also was a member of the Scientific and Management Committees of the European Association of Urology (EAU). In 1992, he became the EAU Secretary General, a role he held for more than 12 years. He also was a founding father of the European Board of Urology (EBU) and the European Association of Academic Urologists (EAAU), and has received numerous scientific and clinical awards from many different scientific organizations. He is an honorary member of many national and international urological societies and has been nominated ‘Dr Hon’ on several occasions in different Medical Schools. Professor Debruyne has authored or co-authored more than a thousand articles in peer-reviewed journals. He still acts as Editor-in-Chief or Associate Editor for many urological journals and scientific publications and has contributed many chapters for urological books, a number of which he has also edited. Upon retirement from his academic functions and responsibilities in 2006, he co-founded the Dutch Men’s and Women’s Health Clinics, a chain of diagnostic centers for urologic care of the aging population, of which he is the Medical Director. 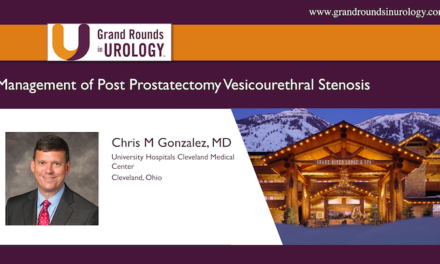 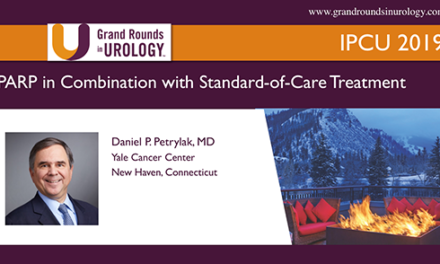 PARP in Combination with Standard-of-Care Treatment 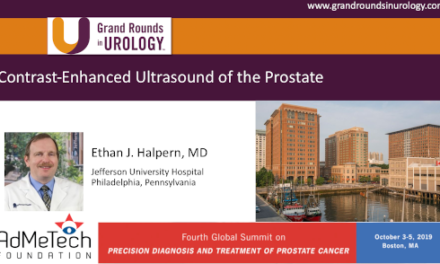 Contrast-Enhanced Ultrasound of the Prostate 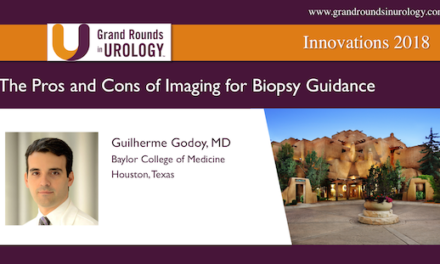 The Pros and Cons of Imaging for Biopsy Guidance